What is going to happen here. A documentary on Lisbon housing crisis by Left Hand Rotation Collective

What is going to happen here. A documentary on Lisbon housing crisis by Left Hand Rotation Collective

A documentary movie about the social movement advocating the right to live in the city of Lisbon, at a time when the various fights for the urban space have increased – the result of the expansion of finance capitalism that concentrates wealth in the hands of a few people, and increases social inequalities.
A documentary about those who challenge the transformation of the city into a merchandise, those who disobey in front of injustice by building power structures for and with the ones who need a place to live.

A documentary by Left Hand Rotation in collaboration with Stop Despejos and Habita! 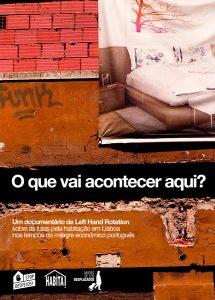 Admitting that there is a housing crisis in Lisbon and Portugal is now commonplace.

However, it should be borne in mind that in the most recent and most visible economic crisis (which combines the effects of global financialisation with those of the touristification of the economy, the gentrification of cities and the consequent expulsion of their inhabitants, as happens in many other cities in the world), The housing crisis in Lisbon and Portugal is structural and deep, the result of decades of housing policies that have encouraged the construction and acquisition of houses, enriching developers and banks, accumulating a large inheritance of empty houses and leaving aside all those who did not have the capacity to yearn for property. In a country where poverty reaches 20% and public housing is reduced to 2%, the waiting lists for “social” housing reach many thousands. Dozens of these families resist, occupying houses that have been empty for years, returning them to their social function, but living under the constant threat of eviction.

Officially, there are more than 26,000 families in a “situation of serious housing precariousness”: single-parent families, migrants, the elderly, and people with minimum wages, in degraded houses, even living in public space in tents, not to mention the overcrowding of families in small houses – 10% according to official statistics. Also in the peripheries, in self-built neighborhoods, and in order to liberalize land for the real estate business, many people are expelled and their houses demolished.

In the main cities, rents have tripled or quadrupled in recent years, becoming unbearable: in Lisbon, the family effort rate is over 50% of income, there are houses for rent for 600/800 euros and every day we see non-renewals of contracts and inhumane, albeit legal, evictions. The houses on the market are no longer intended for the social function of providing a place to live (precisely for those who make the cities work), but for speculation, accumulation and circulation of capital, tourist accommodation and for foreign residents who are millionaires, attracted by the tax benefits and the supply of Portuguese nationality in the short term.

The documentary “O que vai acontecer aqui? (What is going to happen here?, 2019)” tries to dignify the struggles of social movements for housing in the Lisbon of the times of the so-called “Portuguese economic miracle”, movements and collectives that defend the right to live in the Portuguese capital, at a time of intensified struggles for urban space caused by the expansion of financial capitalism, which concentrates wealth in the hands of a few, and increases social inequality. A documentary about those who challenge the conversion of the city into a commodity, about those who disobey injustice by building power on the side of those who seek a place to live.

Left Hand Rotation is an art collective established in 2004 to develop pilot projects in different formats such as video, documentary, installations and urban interventions.

Left Hand Rotation
22 December 2019
Previous
Gendering logistics: Subjectivities, biopolitics and extraction in supply chains
Next
A Logistical Insight on Hong Kong Mobilizations. Interview with Laikwan Pang
You might also like

Finance, extraction and logistics as axes of the third neoliberal moment in Latin America