We publish the Manifesto of Officina Primo Maggio, a “partisan political-cultural project, consciously aimed at exploring the conditions that make conflict practicable, understood as the ability of those directly involved in the production processes” that will take the form of a magazine, inspired by the historical Primo Maggio.

Everything was ready, the first issue packed, the manifesto revised and filed. We were about to go to press and we found ourselves – like all over Italy, as worldwide – in the midst of the emergency from Covid-19, with all its health, economic, social and cultural consequences. Small tweaks and some adjustments were needed for the first issue. The objectives and methods of the project, however, seemed even more necessary.

Capitalist work, or contract work for a third party in its various forms, remains the ubiquitous relationship between worker and employer. Yet it represents the very basis of inequality. We must recognize that at the core of our society there exists an imbalance between those who sell their labour and those who buy it. This exploitation, self-exploitation, and inequality at the interstice of production and social reproduction, take a myriad of forms. The imbalance must be overcome, and it can be done by incorporating realistic forms of conflict using various types of coalition.

Officina Primo Maggio is a partisan cultural and political project, consciously aimed at exploring the conditions that make the conflict practicable. The nature of this conflict is to be understood as the ability to be mobilised by the those directly involved in the processes of production, distribution, settlement, and so on. While it is clear that some of the ways in which social conflict has expressed itself in Fordism have become obsolete, we remain convinced that much still remains to be done and experimented with in the field of labour.

We take into account not only the traditional notion of conflict that is being overtly enacted by workers all around the world, but also the tacit conflict, that remains hidden, unconscious, and latent, and its possibilities of expression in the digital universe. From time to time the question we will try to answer is: how and where to inspire conflict today, especially in worker-employer relations and technical-intellectual services?

This question can be addressed neither in isolation nor in a purely theoretical way. Anyone who claims to want to change the world must engage in the necessary activity without cutting themselves off from outside influence. For these reasons this manifesto responds to its call to open up a space for critical engagement by actively taking part in the establishment of Officina Primo Maggio. We know we have a long journey ahead: the reality of our situation must be analyzed and ideas must be developed together with cultural mediation. This is

a necessary process as to avoid the analysis, outcomes, and concepts becoming inward looking and self-referential. Moreover, this mediation must interact with the political and the social realm, which in turn will guide the formulation of our analysis. Practical and theoretical work must be conceptualized and carried out in parallel, otherwise we risk indulging in these ideas as if it were merely our pastime. These steps (analysis, mediation, action) are all necessary and are constantly informing the dialogue. Each element is vital to the next, and to omit one of them would be to render the others pointless.

Officina Primo Maggio aims to be a place of conversation, confrontation, and dialogue as a political and cultural operation, which starts from concrete experiences and social interactions. We seek to go beyond the knowledge of the individual and his particular role in society. Rather it is only via collective debate that we can allow an operation of clarification and verification of our ideas. The editorial staff, but also the multifaceted team of writers will function as the interlocutors of a network. It is within this network that people will be able to contribute and interact in a workshop of ideas and experience. The word ‘network’ is one that has of course been co-opted and abused in recent decades. However we employ it in its true literal sense: an intersection of people and knowledge that we believe is necessary to move from theory to practice. We will be creating a space for participation, but also have the will and humility to participate ourselves. Without a network – physically scattered and embedded across regions – the statement that theory and practice must proceed together would remain just that… a statement. Without a network the material basis on which to ground solidarity and organize the conflict is nonexistent. 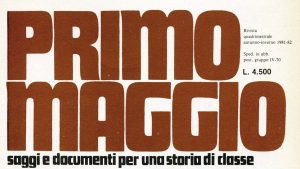 On Saturday the 9th of February 2019, we met for the first time in Milan. The group was diverse, made up of people of different ages, experiences, and geographical, cultural, and political backgrounds. We gathered around the idea of collectively rethinking the remaining legacy of the magazine Primo Maggio, which ceased its publications in 1989. Several things prompted us, not only because in the last year the magazine had published a one-off commemorative issue. Primarily we asked ourselves what the real purpose of our meeting was. The initial presumption of simply reviving that editorial project was soon dismissed. We realized we do not need to reboot the magazine Primo Maggio: its historical mission and the assumptions that drove its making belong to well-situated political season that is way behind us.

What now needs to be done is to understand our present reality, but drawing on the vital and serviceable remnants of the Primo Maggio movement. However, we must also create and develop new schemas that are capable of describing and analyzing today’s changed world, for it is necessary now for us now to break free from the worn out and obsolete frameworks, vocabularies, and methods, that will inevitably keep us tethered to the past. The tectonic shift that we have experienced over the course of the last three decades obliges us to liberate ourselves from our proud tradition. That is to say we need to use our intellect and creativity to address the reality of the present conflict head on, and in a way that is not outmoded. Our priority is to create a workshop space of radical critical thinking in which a collective dialogue and perhaps confrontation can take place. The premise that underlines our editorial work is that dialogue will illuminate and refine collective thought. It is through this process that our political and cultural operation will become relevant.

That said Primo Maggio remains our source of inspiration, primarily for its ability to give the floor to any voice and political topic, albeit one that is within the general realm of the movement’s partisan identity. In the same spirit of breadth and accessibility we wish to promote and develop ideas that, whilst systematic, original, and contrarian, are devoid of unnecessary academic jargon. It is our wish to inherit Primo Maggio’s political identity, and along with it its innate ability to take strong and distinctive positions without falling into unthinking propaganda.

But why now? Is there something about our present juncture that makes this precise political and cultural mission particularly urgent and necessary? We are on the brink of a technological leap in the capitalist system: we may call this its digital transition. There will be two sides to our approach. On the one hand there will be the concrete analysis of our lived reality, whilst on the other we will be bearing witness to the conflict as it is experienced. At the same time, we will be careful to avoid the epochal perspective, and replace it with the worker enquire that was so characteristic of Primo Maggio.

Likewise, we will be indebted to an approach that is careful to utilise the past as a learning experience. In our path to understanding present struggles we will inform ourselves with the collective memory of our militant history. Investigation, research, and militant research that we will push to the fore as we transform present conflicts into a future strategy.