The city is more and more one of the main concepts of contemporary critical theory. Nevertheless, the very possibility to define what a city is remains at stake of contemporary theoretical, empirical and even political debates. The “academic babel” of contemporary urban studies is marked by a proliferation of approaches, methodologies, perspectives, increasingly proliferating and often contrasting. This huge amount of researches on the urban is both a powerful and productive source for expanding the knowledge about contemporary urbanscapes, and a limit. On one hand, the amazing heterogeneity of gazes on the urban enables a complex and dynamic possibility to explore it. On the other hand, there is a risk of hard fragmentation that makes impossible a full understanding of what is going on. 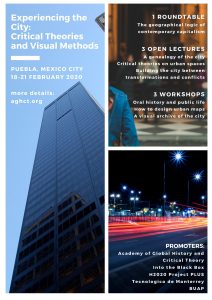 The short-time spring school Experiencing the City aims to elaborate a contribution in the direction of a methodological and theoretical “engaged pluralism” for discussing and grasping contemporary urban dynamics. The school will be based in Puebla (Mexico) and will put together scholars and experts to collectively study, understand and experiment the ways in which we imagine, design and represent urban spaces thanks to both theoretical seminars and practical workshops.

The event proposes a multidisciplinary approach based on 3 open lectures and 3 reserved workshops aimed to introduce scholars both to the critical debate and to the use of field research methodologies. Every day will be articulated into 1 lecture and 1 workshop. Furthermore, the school will be introduced by a roundtable at Universidad Autonoma de Mexico in Mexico City.

Max. 25 participants to the workshops will be selected among students, PhD and early-stage researchers; to apply send a 2-pages CV and a short statement of purpose to info@intotheblackbox.com by the 31st of October expressing “Experiencing the City Application” in the object of the mail. Candidates interested in presenting (15 minutes) researches during the lectures could send a brief abstract (max 500 words) specifying which of the 3 lectures they apply for. Some scholarships will be available.

More details will be soon out.

Into the Black Box Research Collective

Previous
The algorithm and the city. Call for Contributions
Next
Mariana Manriquez – The Case of Uber Drivers in Monterrey

Into the Black Box
17 October 2019
Previous
The algorithm and the city. Call for Contributions
Next
Mariana Manriquez – The Case of Uber Drivers in Monterrey
You might also like

De Stavola – A New Platform Union. The Case of Rappi in Mexico City

The algorithm and the city. Call for Contributions