We are pleased to announce that Into the Black Box will organize a roundtable at next RC21 Conference in Delhi next 18-21 September “In and Beyond the City: Emerging Ontologies, Persistent Challenges and Hopeful Futures“.

Our project is to work on a global mapping of platforms’ different geographical development and this Delhi event is the first step in this direction. So the first results of EU PLUS project will be presented together with other researches on platforms in India and Latin America.

Below you find the roundtable agenda and the abstracts. 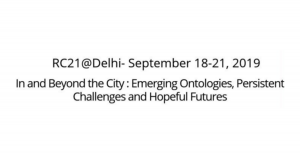 “The global challenges of “platform economies”: a trans – urban perspective”

Mattia Frapporti: “The global challenges of “platform economies”: from the PLUS project to a global gaze”

Adopting two main geographical scale, the roundtable we are proposing would like to face the global challenges of the so-called “platform capitalism” with a trans-urban approach. Platform economy, in fact, is undoubtedly a global phenomenon which is bursted since the last decade. All around the world this new type of economy is insinuating in the society imposing new opportunities as well as new challenges, especially for the cities inhabitants. This is the reason why, despite we will theoretically propose an analysis with a general overview on the platform economy, our focus will be on urban areas, where the effects of digital platforms are most apparent. Consequently, urban spaces are pivotal in this roundtable, even though we do not think of them as strictly bounded. We consider cities as a broad area that «surpass their own contours», integrated in a global network where social requests are developed by a multitude of actors. Starting from a wide reflection of such a kind of new economy generally considered part of the so-called “Industrial Revolution 4.0”, we will then focus on a specific case study composed by seven key European cities: Barcelona, Berlin, Bologna, Lisbon, London, Paris and Tallinn. On the one hand, we will face the «critical effects» of platforms in such cities both from an historical, theoretical and empirical point of views; on the other hand, we will concentrate on how «technological changes affect patterns of exclusions, the formation of social categories, or new and persistent inequalities».

Platforms are first of all urban technologies, impacting directly on metropolitan areas and radically changing and challenging their development. While the previous “industrial revolutions” have had different temporal implementation accordingly to the geopolitical location of the cities, the so called “industrial revolution 4.0” (digital platforms can be conceived as an icon of it) is defining an almost simultaneity of platforms “territorialisation” worldwide. Therefore, there is a need to conceptualize new analytical and theoretical tools to grasp this dynamic. The intervention will discuss the idea of “trans-urbanism” as a way to define the global emersion of platform capitalism in urban spaces. The elaboration of a trans-urban approach is under construction in a European research project called Platform Labour in Urban Spaces having 7 European cities as case studies, and will be also presented in historical terms.

Shahana Purveen: “Taxi Drivers In the Era of platform Economy”

The proliferation of digital platform and mobile application in recent year has been the primary source for the momentum in collaborative consumption in recent years. It is prevalent across the globe in the form of peer–to-peer ride-sharing, accommodation sharing and renting household items although it is a relatively new concept in India. In India Platform economy is penetrating in various sectors such as transportation, hospitality and food & beverages. However, it gained popularity with the penetration of Uber and Ola in taxi industry from past 6 or 7 years. Traditionally taxi industry was dominated by the famous Kaali and Peeli (Black and Yellow) taxi in Mumbai. Black and Yellow taxis always prove crucial in their role of providing last mile connectivity as well as safety. Yet the service providers (taxi drivers) always come under the ambit of apprehension and their integrity is always questionable. The entry of private aggregator companies like Uber and Ola have added more difficulties for drivers of Black and Yellow taxis. Therefore, the present paper try to explore how the more recently introduced digitally managed systems of service-provision affect taxi drivers’ experiences of work in Mumbai city. The paper also try highlights the need of new policy that can resolve the issue of drivers’ status being micro-entrepreneurs or self-employed in present scenario. Mixed methodology will be used to integrate both qualitative and quantitative methods in the research.

Archana Mohan: “Can Gurgaon become a Sustainable and Inclusive City? Analyzing the Role of Startups and Technology Platforms in urban India”

In order to cater to the demands of the global capital, satellite cities and towns in India have rapidly grown into major urban centers that are attracting migrants from all over the country for better employment opportunities and standard of living. However, these urban centers lack strong infrastructure and basic amenities and hence, access to resources is a daily struggle for all. This has enabled startups using technology platforms to provide services such as transport, waste management, and so on. Startups use technological efficiency and urban sustainability as tropes to offer innovative solutions to urban spaces. They are also redefining work available to people who are migrating to cities in large numbers. Based on two years of ethnographic fieldwork in Gurgaon, this paper analyzes the ways in which these tropes are used to rebuild it into a sustainable and inclusive city but may exclude those at the margins of urban economy.

The image of the platform generally indicates a new type of enterprise based on sharing, aggregation of offer and demand, horizontality of exchange. It is, generally, a business model that is radically transforming the labour market, the organisation of the production process and the forms of consumption.

We should also note the close relationship between many of the companies described as platforms and the urban dimension. On the one hand, the city is increasingly identified in a re-productive space in which activities linked to circulation, consumption and care are central. On the other hand, a new figure of productive subject seems to emerge, that of the urban entrepreneur who valorises some of his/her property related to his condition as a city user (the house, the means of transport) and his/her soft skills.

At the same time, however, it is clear that strong inequalities are created where platforms seem to be able to impose themselves as a winning business model, while digital workers often complain about a lack of protection in terms of rights and salaries. Food delivery expansion and riders’ unionism in the city of Bologna represent stimulating points of view on the role of urban spaces into capitalist accumulation, on new forms of labour immaterial control and workforce subjectivation.