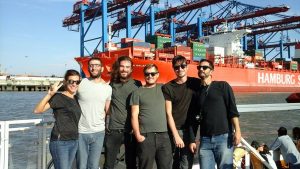 Into the Black Box is a project of multidisciplinary and collective research that adopts logistics as a point of view on contemporary political, economic and social transformations. It started with a research project by some PhD scholars of the University of Bologna on supply chain development and conflicts in North Italy; the output of this work has been presented during the Berlin summer school “Teaching the Crisis” in September 2013. We conceive logistics not simply as commodities circulation, but rather as a whole biopolitical apparatus that performs spaces, subjects and powers. “Assemblage”, “connection”, “disruption”, “hub” are becoming central categories for a critical theory that aims to understand globalization processes, labour transformations, dynamics of territorialisation and de-territorialisation, processes of subjectivation. The black box is the symbol of contemporary management techniques and devices that hide the whole logic of the system to external viewers. Similar boxes are all around us: in platform capitalism, in urban planning, in labour organisation, in State governance. A way to penetrate the opacity of the system is to analyse inputs and outputs, operations and consequences, procedures and resistances. So, a multidisciplinary approach that combines sociology and anthropology of labour, political theory, ethnographic inquires and historical perspective could be a flexible tool to shape a logistics understanding of contemporary world. Into the Black Box is now a blog which hosts materials (events, articles, conferences) that contribute to curry this research on.

Into the Black Box has a website as a collective space of inquiry, research and analysis. All the materials are available to be shared and diffused. Moreover, the website hosts contributions from other authors and experts who we thank for the cooperation.

“Manifesto” is a critical analysis on the role of logistics and spatial dimension in contemporary capitalism we propose as methodology. It is available in English, Italian and Spanish.

In the “English” version it is possibile to find all the available materials in english language.

The section “eventi” points out conferences, seminars, call for paper and presentations.

In the section “AmericaLatina” we present specific contributions on logistical policies and spatial changes in the South American continent.

Subscribe to the Newsletter to keep up to date with the activities and publications of IBB!

Carlotta Benvegnù has a PhD in Sociology, she is a member of the Center for Sociological and Political Research in Paris (Cresppa – CSU) and works as a post-doc at University of Paris 13 within the project PLUS (Platform Labour in Urban Spaces: Fairness, Welfare, Development). Her research interests focus around sociology of work, industrial relations, labour market segmentation and migrations.

Niccolò Cuppini is a researcher at the University of Applied Sciences and Arts of Southern Switzerland (SUPSI). He obtained a PhD in Politics, Institutions, History at the University of Bologna in 2016 with a dissertation entitled “Genealogy of the Globalized City. Political Premises of the Urbanization of the World”. His researches are oriented towards a trans-disciplinary approach within the urban studies and the history of political doctrines fields. Moreover, he researches on logistics and social movements; sociology of labour and platform economy. Niccolò is involved in many international research projects in Europe (“Platforms in Urban Spaces” – HORIZON 2020), Africa (“Welcoming Neighbourhoods” – SUDAC), Latin America (“Urban Regime and Citizenship in Rio de Janeiro” –  FNS and “Impact and Legacy of Mega Events in Buenos Aires” – CLS) and the United States (“A trans-national research network on logistics” – FNS). He is editor of the Journal Scienza&Politica.

Mattia Frapporti has obtained his PhD in History and Cultures at the University of Bologna with a research thesis entitled “The logistics space of the United Europe. On Jean Monnet and the rationality of integration”. His focuses are on the process of European integration, the politics of infrastructures, logistics and the role of State. His now post-doc fellow at the University of Bologna mainly focusing on platforms in the urban spaces and on the  genealogy of logistics. He is also editor of the journal Zapruder.

Floriano Milesi is a PhD Candidate in History, Cultures and Civilization (University of Bologna). Previously he completed a Master Degree in Cultural Anthropology and Ethnology with a thesis in Anthropology of Work. His current research is focused on the relationship between human and machinic labour in platform economy’s corporations.

Maurilio Pirone is Post-Doc Fellow in “Discipline of labour and new processes of unionism in platform economy” for the Horizon2020 Project PLUS (Platform Labour in Urban Spaces). Previously, he completed his PhD in Politics, Istitutions, History at the Department of Social and Political Sciences of University of Bologna with a final dissertation titled “The government of labour-force. Production and subjectivity in Marx” (supervisor Prof. Sandro Mezzadra). His research deal with platform capitalism, new forms of urban unionism, the impact of digital technologies on labour discipline, logistics.