Here we publish an introduction to the collective research of Into the Black Box we presented at last Historical Materialism Conference. In fact, the 7th of November we participated to a panel on workers’ inquiry with Notes From Below, Viewpoint Mag and Plateforme d’Enquêtes Militantes. The goal of this meeting was to create a transnational networking among these projects to commonly investigate new paradigms of class composition nowadays. In next months we will work in a common effort to realize such collaboration.

Into the Black Box is a project of collective research that adopts a logistical gaze as a privileged lens for analysing contemporary political, economic and social transformations. We firstly met some years ago while all of us where, even if in different contexts and with different perspectives, developing forms of inquiry, participation, and co-research within an extraordinary path of struggles, strikes and blockages in the North Italy logistics sector, what we labelled as the northern Italian megalopolis.

These struggles have been one of the most important labour conflicts in the aftermath of the global crisis of 2008, due to their radical practices, their efficacy, their territorial extension and the ground breaking characters they represented. During our inquiries in the pickets we immediately realized that a new segment of the class composition was emerging in a conflictual way. Moreover, it is important to note that, during our successive researches, we realized that the logistics struggles where not a local case to be framed and understood only within the Italian scenario. Rather, a powerful cycle of wildcat strikes and blockages marked a myriad of nodes of the logistical supply chain worldwide from 2009 to 2013, from Los Angeles to Rotterdam, from Vancuver in Australia to Val Paraiso in Chile and so on. Furthermore, the labour condition where quite similar in terms of the condition of employment – a diffused use of externalization and subcontracting, and a clear racialization of the labour force. The Italian logistics struggles where effectively played mostly by migrant workers in a sector characterized by a scarce investment in technology, where the national Unions where absent or totally in continuity with the logistics management, and with a specific way of employment: the cooperatives. This used to be quite socialist form, which has a strong tradition and root in the Italian working class movement, has nowadays become mostly a tool for the companies to underpay the salaries, reduce labour rights, do not take directly in charge their own labour force. However, the struggles and the organization process of the workers within rank and files unions and autonomous organizations have been absolutely effective in challenging the logistics management, disrupting the supply chain and gaining a series of victories in terms of rights, salary, contracts… and most of all in gaining through the struggles what they used to shout during the strikes: dignity. 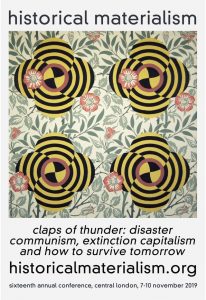 We realized that one of the most significant factors of this efficacy and capability to gain effective winnings and to seriously damage their counter-parts of this labour struggles were precisely related to its nature, meaning logistics itself due to the increasingly relevant role of logistics for contemporary capitalism. We started to conceive logistics not simply as commodities circulation, but rather as a whole biopolitical apparatus that performs spaces, subjects and powers. “Assemblage”, “connection”, “disruption”, “hub”, words taken from a logistical lexicon, are becoming central categories for a critical theory that aims to understand globalization processes, labour transformations, dynamics of territorialisation and de-territorialisation, processes of subjectivation. Moreover, the ways in which logistics works has often be labelled as “black box”. The black box is the symbol of contemporary management techniques and devices that hide the whole logic of the system to external viewers. Similar boxes are all around us: in platform capitalism, in urban planning, in labour organisation, in State governance. A way to penetrate the opacity of the system is to analyse inputs and outputs, operations and consequences, procedures and resistances. So, we decided to constitute a collective research project, a trans-disciplinary approach that combines sociology and anthropology of labour, political theory, ethnographic inquires and historical perspective calling it Into the Black Box, conceiving it as a tool to develop a logistics understanding of contemporary world. We wrote a “Manifesto of Critical Logistics” that can be read on our blog: www.intotheblackbox.com.

In the last years some new phenomena are happening, leading us to develop further our research. Firstly, we are assisting to a restructuring of the logistics sector as a response to the struggles, articulating a complex strategy of an attempt to subsume them, to repress them, and to overcome them via technolgical innovation. Secondly, logistics writ large has become even more relevant than before, within the emerging paradigm of what is often labelled as the “4.0 new industrial revolution”. Digitalization, automation, Artificial Intelligence and so on are delineating a new ideological and concrete pathway of capital development. More than the economic sector of commodities circulation, logistics has become a paradigm, a matrix of rationality, directly applied within the production processes firstly in the German car industry or intended as an infrastructure for distribution and consumption in the digital turn promoted firstly by the so called Californian ideology. We are reflecting on the category of “Revolution of Capital” (both in technical and in social meaning) to grasp these processes, as a critical way to understand what is concretely happening and to elaborate new tools of critique and action. 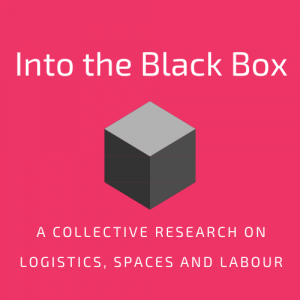 We think it is possible to talk about an emerging blackboxed circulation, where the “immaterial turn fostered by financialization privileges the circulation of derivatives and other immaterial products as the new profit paradigm”. But circulation is more than what just ‘disappears’ in digital networks. Intrinsically, it also involves material products, goods, and resources, and is supposed to take place practically everywhere. The urban core areas are increasingly becoming crucial nodes. Here, as we discovered in following the logistics struggles, most things are being moved along the ‘inaccessible’ pathways of logistical infrastructure—and thus below the radar of perception and representation. In short, we could talk about a “black box politics” as a way of governing the basis of today’s everyday life, that is, the infrastructure for both material and immaterial, analogical and digital movements. This tendency is exacerbated as Alphabet, Uber, and Amazon expand their AI-powered logistical infrastructure, accelerating the transformations and moving toward a privatization of formerly public services and the mutation of cities into the ideological and concrete label of ‘smart cities.’ In the course of this work processes – and their control – are increasingly withdrawn from a possible scrutiny from local communities, urban inhabitants, and the very majority of the people more generally.

Therefore, in the last years we added to our inquiries a relevant focus on what we called “the new metropolitan logistics”. If the logistics struggles used to took place in warehouses and places located in the peripheries and in the so called “province”, a plexus of factors (4.0, the technical implementation of logistics,  the response to logistics struggles, economic crisis and so on and so forth) lead to an impressive acceleration of the logistical logic. To make it easier to understand: the home delivery and a full extension of the “just in time and to the point” economic rationality is a crucial character of our times. Amazon, the most important contemporary Company, but also Glovo, Uber, Deliveroo and many other emerging digital platforms and Companies are first of all logistical companies.

It is precisely for this reason that Into the Black Box in the last couple of years started to investigate this emerging frontier of capital development, adopting a multifaceted perspective. First of all, we participated and analysed the frictions, resistances, tensions and struggles born within digitalization process, from Amazon strikes to the struggles in the food delivery sector. Starting from this, we are trying to develop a planetary mapping of these struggles and we are developing a specific European study of the territorialization of many platforms like Uber, Deliveroo, Airbnb and Helpling. Our approach tries to consider the interrelation between class composition and urban mutation as a whole, in search of an adequate set of tools to investigate and intervene on our contemporary planetary condition. Finally, in the last period we started to discuss how to adopt and develop a specific ecological lens to these processes, and to frame the logistical gaze in terms of social reproduction. I should say many more things on these and about all our research and inquiry perspective, but I hope that these few snapshots could be enough to give you a general idea about the history of our experience, its main characteristics, and its perspectives.